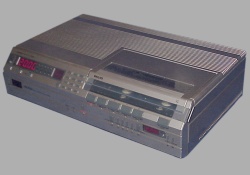 Paul Todd,I have splice a VHS cleaning cassette into a V2000 cassette,it works great,use 1/2" PROPER splicing tape that does not ooze,my kit was bought at Tandy 20 years ago,trim the edges with scissors to bring it back to 1/2",I dribble panel wipe What paint sprayers use to remove skin oils)Then play for 10 seconds,then leave 10 seconds,then play a tape,it works every time,in the past I have use top quality REAL Scotch tape to splice,and then trim,just keep the splices away from the heads,otherwise the oozing may be a problem,Hope this helps,Regards,Ray

Hello all,I have a Canon microfiche reader printer machine,and would like to borrow the Grundig microfiche that has the Grundig video stuff on it,it has the machines before the V2000 machines,and the V2000 machines,the FAC cameras,and the short lived small CVC format machines called the VP 100,maybe I can borrow,or buy,or maybe some kind person can connect me with a past or present Grundig dealer,I have been using the V2000 and VP 100 and FAC camera stuff since 1982,and I also have a few of the V2000 portable tuner/Timers from Philips and Pye brand,Thanks,RSVP,Regards,Ray

Also if anyone has any V2000 tapes with old recordings on that they are willing to post to me for a reasonable price I will pay. Of course I pay for postage too, but must accept PayPal payment. Thanks 😊 07510100022

Hi I’m interested in paying for anyone who has a used or new but either way in fair condition wet cleaning tape for a V2000 please? I have a working unit here that I bought off a good seller in Netherlands however I don’t want to take it apart for head cleans each time also it has been sealed and is there is some guarantee I would rather not break the screw seals opening it up. I have looked for one for some time but find nothing. I was thinking of dismantling a couple of old V2000 cassettes and winding on a VHS wet cleaning tape to the spools then simply drilling a hole for the application of cleaning fluid. Is anyone willing to sell me such a tape cleaner for a reasonable price? Or willing to make me one in the above manner or similar? If not I will attempt making one myself, so if anyone has any tips or anything that is a wet V2000 tape cleaner get in touch. 07510100022

Over Christmas had problems ... While playing or recording the machine would

switch off and back on clicking after about 10 seconds to continue playing or recording.

The main cause is the following...

I've checked the main access point where the electric cable is plugged into on the machine... It looks like this part is damaged and been on its way out for some time and expanded becoming

Does any one have parts stripped out of an old VCR, The circuit board that I require is about the size of a 'thick finger' the main electric lead plugs into then two brown wires solder onto main transformer.... This circuit board capacitor is what I require.

I do have pictures of the item required

I have a Phillips V2000 video recorder bought in 1982 which needed repairs in 1986 and has been stored in its original packaging ever since. Deciding to have a clear out over the weekend I almost took it down to my local recycling centre but had second thoughts. If anyone would like it free of charge they are welcome to come and collect. You never know one of you boffins might be able to get it working again or use it as a donor unit. I live in the South Croydon area, Coulsdon

I'm working on a total of 4 of these machines at the moment which I've had in storage for 10 years or so. One thing i have found with one of them is the magnetic material on the capstan flywheel had become unstuck and had swelled slightly too. This was causing the flywheel to foul the board slightly giving a similar issue to you. On mine I had to re-glue it and then file it down slightly and it now works perfectly although the head rotary transformer also had a similar issue where some slight over-spill of glue was causing the head disk assembly to slightly foul it. Again I very carefull removed the glue and it's now working well.

Hope this helps but if I find anything else as I work on these, I will let you know.

Another thing I have also just thought of - have you swapped out all of the capacitors in the power supply? Makes a huge difference...

I have a Grundig 2x4 Plus which has a servo fault that I've been trying to fix for the last 30 odd years! Playback of recordings done before the fault appeared are OK, so obviously the servos in playback are OK, as are the heads and motors.

Now, when a recording is done, it plays back with severe tracking errors every few seconds. (If it was VHS, I'd say it was control pulses not being recorded, but obviously there's no such thing with V2000).

My conclusion is the capstan servo is the problem, because if I put the machine in pause when the picture is clear, it stays clear - so the head servo must be OK.

All the waveforms are there, although I cannot adjust the APB preset to centre the reference pulse on the ramp, it wants to stay up one end. If I try to change it, it loses lock. So phase problem?

I think the DTF is working, since there's the waveform being fed into one actuator during record, although the fixed voltage fed into the other actuator is about half what the manual says - not sure if that's important or not.

I realise there's hardly any Grundig 2x4 machines in use, let alone anyone that is familiar with them, but here's hoping someone might be able to help.

I'd really like another machine to swap modules from, but here in Australia, I can't see that happening.

If this is the unit for sale on Ebay then you'll have to check all solder joints on the psu board. Make sure the back up battery is changed if it won't hold charge as a defective battery can cause all sorts of problems with these vcrs. Also check the condition of the pinch roller before you attempt to play any tapes. The unit can be put into play without a tapes present.

Thanks In Advance Mark

Just a suggestion = Research the magnetic tape that can be purchased on ebay.

It comes in all sizes and thicknesses.

I used it for flexible car signs it can be cut with a craft knife and seems the same as you need.

The magnet may be stronger so may cause overload and other problems so do the research.

Thank you so much! Unfortunately the magnet is incomplete...two large pieces and the rest is just crumbles, it's impossible to stick them together!

If your problem is not solved and magnet is complete Run super glue into all cracks on magnet. When dry replace capstan plate turn a few times by hand remove plate high spots will show .Scrape down with sharp blade replace plate turn by hand and repeat until it turns freely. Can take along time but works for me.

I'm having some trouble with a Grundig 2280,

The magnetic plate underneath the capstan wheel is cooked and got thicker and flaky. Now it touches the sensor below, making the capsan unable to turn. If i completely remove the magnet, there is obviously no control of capstan speed and it runs at its max speed. Is there a way to fit a new magnetic ring, or shall I look for a whole capstan? (Where?)

Suggest you first look at Colin's video on this machine (https://www.youtube.com/watch?v=YWjLNalBU2c&t=234s ). He is pretty much spot on with the issues on this.

As a general rule the Gold-coloured capacitors in the power supply board need replacing (with modern equivalents) and if you're lucky this will bring the thing back to life. If you don't hear a "click" from the power supply solenoids when you take the machine out of standby then the clear-plastic solenoids are likely corroded or gunky. A spray of servisol sometimes fixes this one.

As Colin's video shows - sometimes - it's a fault on the front (keys) panel that is the cause, but I have found this to be quite rare.

I have a Grundig 2 x 4 Super video 2000 with a faulty power board. Does anyone know where i can get hold of either a working power board, a service manual for this machine, or perhaps just a circuit diagram of the power board?

Has anyone got a new or very good condition video head for a Philips VR2022 they'd like to sell please?

Problem solved on my vr2022. It was broken solder joints on the rectifier on the main power board.

Also, has anyone got an unused or a very good condition pinch roller for the vr2022 for sale please?

I have a problem with my Philips vr2022 whereby the solenoid between the supply and take up reels keeps clicking very fast when I press the tape transport functions. Even when I press power it clicks. It doesn't click when I power on if the cassette lid is in the open position.

I've changed the battery and taken out that usual capacitor that goes up in smoke on the small power cable PCB (because it did actually blow).

Any suggestions would be appreciated.

Have you double checked that all of the plug in connectors are seated correctly?