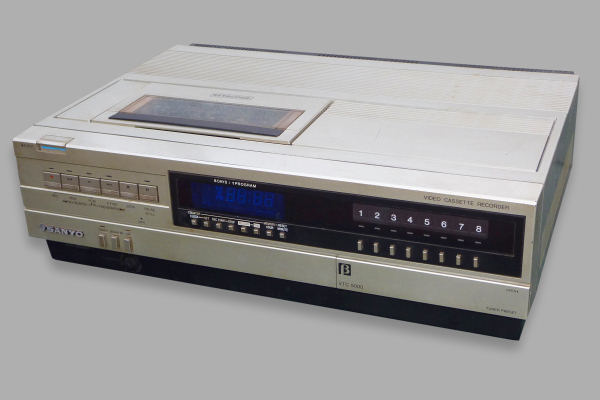 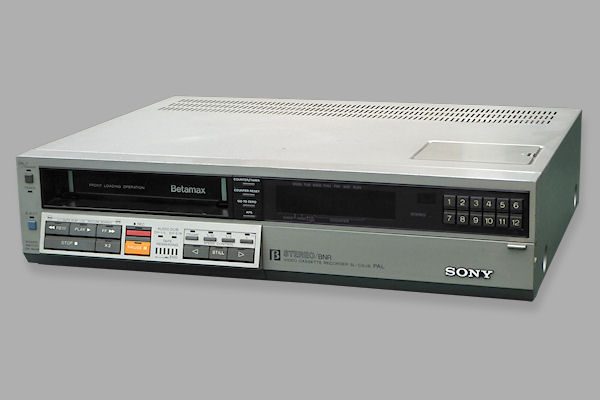 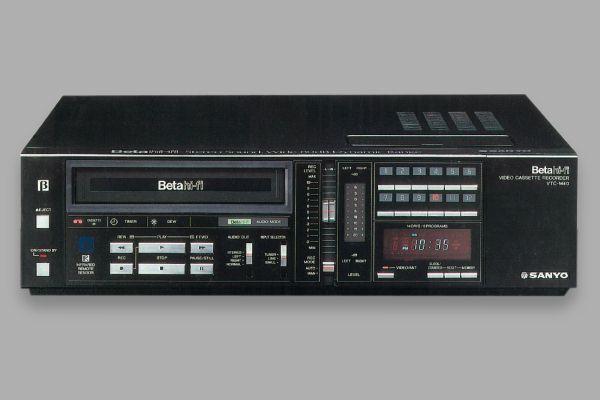 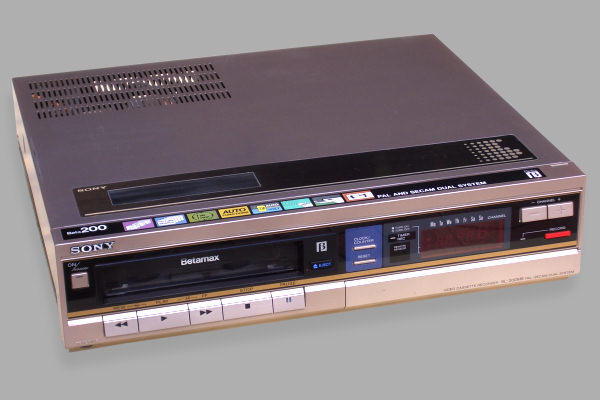 Sanyo M20 - is there a downloadable service manual that anyone has found? My M20 accepts the cassette, but only makes a whirring noise if I try to play, rewind or forward wind.

Regarding your Sony SLC5UB stopping at regular intervals of around 10 seconds during play. Set the machine to play with the top off and observe the tapes path to the back of the machine behind the head drum and the action of the tape slack tension lever just after the capstan roller. This should be firm and not moving in and out. Movement indicates that the forward tension is varying which may require replacement of the parts related with that mechanical drive system for the tapes pickup reel. That might be a rubber roller or the actual tension unit which has a slip mechanism involving a spring and felt pad under tension. The levers purpose is to stop the machine if the tape breaks or tangles of tape filling the machine under fault conditions.

I have Sony sl-c9 but it stops right after pressing play. Maybe it has drumhead broken etc. If anyone is intrested about it - let me know.

General vg -200e picture is looking good but sound goes wowoowowo. Any ideas why is it that way?

I wonder if anyone can help me with a very old Betamax player?

I have a Sony C5ub that's been in the loft for many years after a belt snapped, must be 20 years ago!

Finally got round to trying it again as have some irreplaceable tapes, having sourced some belts recently.

Replaced all and after some fettling and lubricating it appeared to start working albeit with a display that has some horizontal lines and flickers into b/w and back into colour during playing. Thought of replacing capacitors as per common advice but another show stopping issue has cropped up after it played nearly 15 mins.

Unfortunately, having run for 15 mins, this worst fault is that it plays for 10secs to a minute and then switches play off. It will start again when play is pressed and repeat the cycle. Fast forward and reverse seem to work at roughly the right speed whilst in this state. After going through the play-stop-play-stop routine a number of times it stops playing/FF/RW until power cycled. Then it works again as described. When it is in the 'failed' state it will still unload and load tapes but not play them until power is cycled.

Loading and unloading work at a reasonable speed and as mentioned all belts have been renewed (and that was a hard job).

Any suggestions would be gratefully received. I should add that this is the first time I have worked on a machine like this so please describe any adjustments or things to check with that in mind. Without the MrBetaByte videos on YouTube I wouldn't even have tried to recover this machine.

I know I'm probably looking for a unicorn but does anyone know where I can lay my hands on a reasonable condition SL-C9 ACE assembly for my Sony SL35 . Im in Brisbane Qld Australia.

In the middle of converting old family Beta tapes to DVD and sound has all but disappeared.

Many thanks for your response. I am looking at machines on ebay and one disadvantage of the Sanyo vtc-5000 is that many of them seem to be located in the UK. As I live in Ireland I have to take account of Brexit charges.

A slightly newer Sony from an EU seller and a vtc-5000 from a UK seller could end up costing me about the same. Pros and cons to everything I guess but with 1980s electronic/mechanical devices, relative simplicity and parts supply have to be big considerations in 2021!

any issues email us and may be able to help you

Apologies for the tardy reply, work has been manic

i know they are beta heads

once again many thanks for your help mate

Hi,I have a C6ub which has a perfect picture,but it is only in Black and white.I was told this is a common fault.....is there a fix for this

Hi, I recently purchased a Sony SL- C35LS and all was fine. I have been digitalising old tapes. The issue I am now having is with sound. The sound has reduced significantly to the point of being barely audible. I have cleaned every surface that looks like audio points to no avail. The picture is clear. Can someone direct me to where I can locate the audio pickups so i can ensure i have cleaned them all. To clean I used isopropyl alcohol and a cotton tip. Thanks for any assistance you can give.

Can you help me ?

I have been given a partly working Sony C7 and a box of home recorded tapes (some of which are very mouldy) that were recorded on it 1985-1991. The C7 loads and plays tapes but picture is unstable and flickers which I think means bad capacitors. Also, RW is very slow and some tapes won't RW at all.

I do not have the skills to attempt a repair but perhaps I can acquire the ability at some point. For now I'm thinking about buying a refurbished machine on ebay. Based on prices and reviews, I was thinking of a Sanyo VTC-5000 or a Sony SL-F60. One of the things that I want to do with the tapes is extract the teletext from them which is something I've done with VHS.

Considering my poor repair skills, limited budget and mouldy tapes, would anyone have any comment on the two machines mentioned above. Thanks!

The part no's for the Sanyo video (Hi-Fi) heads are as follows...

AS this is an early Sanyo and keeps the tape laced at all times.Check the sound part of the stationary head is'nt blocked with dirt/tape debris.Also Also check the lead, if using the optional audio output connection.

If using RF then the tuner may have an issue or it's frequency output needs tweaking, as many were retuned away from CH36 down to interference when Ch5 was first aired.

Failing all that it could be an issue with the sound board in the VCR (common suspects are Electrolytic caps or the IC itself).

I'm looking for the head part number for 2 models as i cant read them clearly from the heads i have, and just need someone else to confirm this

Can some one please help as i need a little assistance.

I have a Sanyo vtc 9300. I have it connected to T.V with a great picture quality. However, i cannot get any Audio. Tried several tapes and same issue,, great picture, no audio.

any greetings will be appreciated my email is [email protected]

Any greetings will be appreciated

Any greetings will be appreciated

Apart from what Kevin told you which are the most likely issues, the Sony C20 (and other models in the series) can also have issues in the power supply with RF noise being generated by the regulator circuits if the capacitors have aged. Replace all three of the 10uF capacitors on the board. Another issue is the carrier balance setting which gives blue diagonal lines on the picture if not set correctly to null the carrier.

See http://www.palsite.com/slc20tech.html for hints on issues.